Highwood Crossing is a grain farm in High River run by the Marshall family, from which Lowen’s has been sourcing non-GMO canola oil since 2014. Now, the relationship has come full circle with Tony and Penny Marshall buying Lowen’s products for their first grandchild, Olive. 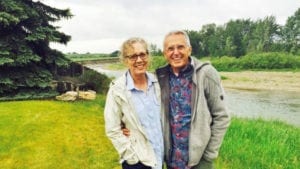 “How time flies when you’re having fun,” says Tony. The “catalyst” for Lowen’s and Highwood Crossing to meet was Stephanie Jackman, Founder and President of REAP Business Association – a values-based networking group of which both businesses are part.

“We love knowing where products come from and knowing the people who make them,” says Tony. “It’s an absolutely fantastic relationship.”  To give a little background, Lowen’s uses Highwoods omega fatty acid rich canola oil in their lip balms, diaper balms and lotions.  “Being able to integrate fresh, cold pressed non-GMO canola oil in

to our line of products has been vital to the success of our products” says Chad, of Lowen’s.  “That combined with the incredible quality and nutrient dense attributes of Highwood’s oil really contributes to an effective formulation!”  Canola  oil is the olive oil of the prairies, dontcha know?!!

Tony’s first foray into grandfatherhood has been an exciting experience. “It’s just wonderful having a little one around to play with, and then I can leave her mom and dad to be up all night with her!” Tony even has an app on his phone that keeps track of little Olive’s age (two months and 29 days at the time of writing).

Being a father and grandfather has taught Tony to “see the long view” with his business. “Not ‘Longview,’ that’s just over the hill, too far away,” he jokes in true fatherly fashion.

“It’s taught us to appreciate sustainability, and sustainable agriculture – which is something we really believe in.”

Tony has been specifically farming sustainable grains since 1989, on farmland that’s been in his family for over a century. The vast majority of canola oil on the market today is genetically-modified, “so to have a non-GMO canola crop is quite rare,” he says.

“It takes a lot of effort to be able to do that, and it’s important to have that option. Canola is a wonderful oil.”

As for what’s new in the business, Highwood Crossing is rolling out some new products this fall, including three new granolas and hot cereals, with some cookies in the works as well.

To pick up some of Highwood Crossing farms amazing products, click here. 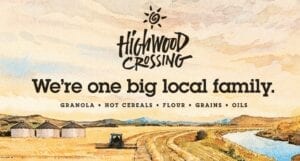 Why All-Natural Vegan Lip Balms Are Better For Your Lips

This week I was given the chance to speak with Anna, creator of the amazing:…