Lowen’s Super Salve and my Dad

It’s no secret that we like to have fun here at Lowen’s.  Right from the get go when we developed our first product, Lowen’s Butter Balm, we wanted to create unique products, that were well thought out, safe, effective, affordable and long lasting.  As well, many of you know that we are a family owned business, named after our daughter Lowen, who, along with her sister Simone, inspire us daily. n story down to how we source ingredients and through to our product names, there is always a story behind it.  Today we are telling the story of Lowen’s Super Salve;

The background behind Lowen’s Super Salve and my Dad

Around 2012, when were were making some headway as a company and thinking about adding products to our product line, we started to think back to early suggestions users had about our Butter Balm, which was formerly named Lowen’s Bum Balm.  We found out that rash, dry skin, eczema and psoriasis sufferers alike were using our balm to successfully treat their skin, often seeing improvement overnight.  Which is so awesome!  However, they were not thrilled about using a so named “bum balm”  to achieve this.

As one of our corporate values is Inclusiveness, we didn’t want to deter people from using our products simply because of a name.  So what to do?

I really liked the name Bum Balm, and honestly thought it might catch on as products like Udder Butter had, with people applying it to their face (instead of milk cows nethers)…

From Bum Balm to Butter Balm

That didn’t happen, so my partner Lindsay suggested that we tweak the name to “Butter Balm.”  As well as create a specific diaper balm with a little more dryness power.  So I added 20% zinc oxide to our Bum Balm formula and Lowen’s Bum Balm Blues was born! But the “new and improved” Butter Balm presented yet another problem:

The jar was a little cumbersome to carry around with you.  People wanted to have it at the ready when they needed it.  So, the 100 g jar was more appropriate to leave at home (or carry in a diaper bag)

Simple enough.  But what do we call the new thing.

Then it hit me…

The Birth of Lowen’s Super Salve 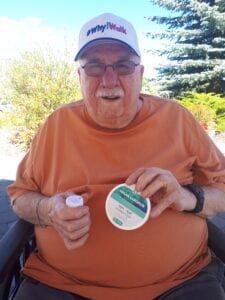 up in Saskatchewan, I remember my pops asking us to get “that salve” and “put salve on my back.”  This was the first time I heard the word.  Only when I started working in Pharmacies, did I hear the term again.

So I wanted to use this term, didn’t really see anyone else in the space using it and then threw “super” in front of it to add in some kitschy alliteration to seal the deal.

So there you have it. The Lowen’s Super Salve Story (yeah…alliteration!)

To the left you can see my dad, Kenneth.

Sitting strong at 79 holding a jar of Super Salve that he inspired as well as his favorite product, Lowen’s Vegan Vaporub.  Something he applies under his nose each night before bed to open his sinuses.

Dad is wearing a “Why Walk” ball cap in support of Parkinson’s disease research – also a condition, along with crohn’s diease , that he has been managing in stride, for a lot of years.